The Chalet des Érables opened in 1948. The original building, the traditional menu and all family secrets are passed with pride from one generation to another for the past 69 years! The owner Marius Lampron and his wife were the first of several generations to maintain this family jewel that is now part of the region’s heritage. In 1948, the sugar shack of a hundred sitting places was open to the public only 2 months a year in March and April in order to offer the people from the surroundings the opportunity to come and satisfy their sweet tooth. 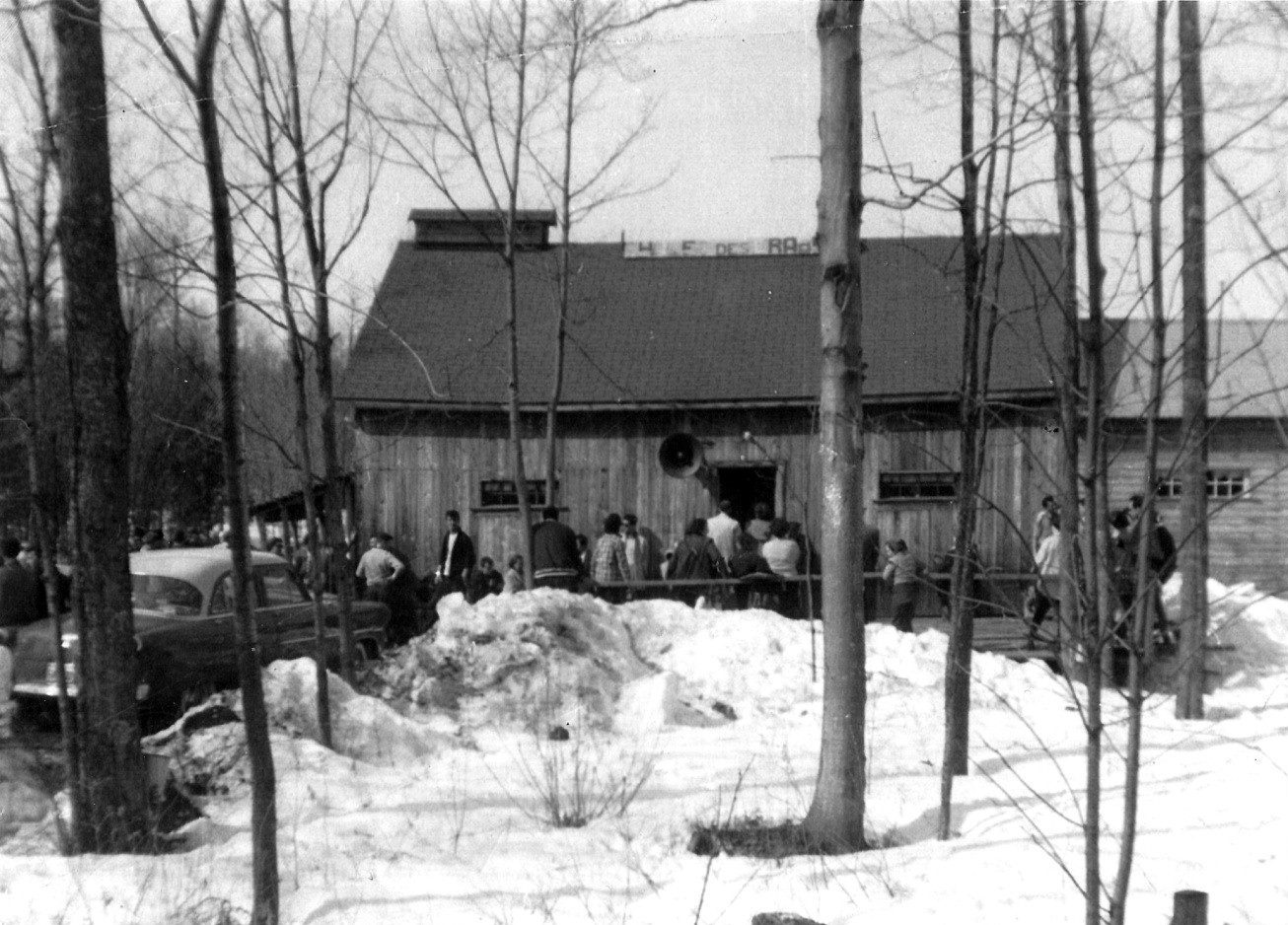 The first dining room at the Chalet des Érables in 1948.

In 1958, the sugar shack lives its first transfer to a new owner … Hélène Lampron, Marius’ sister takes over with the help of her husband. Being a woman, Helen decided to offer a new perspective and opened as a first reception hall opened 12 months a year under reservation only. In 1963, was celebrated the first wedding in the sugar shack’s history, unaware that it would be the beginning of a long line of wonderful and happy events. In 1970, following the death of Helen, the sugar shack changed hands a third time. Mr. Jean-Guy Lampron, Helen’s brother, and his wife Marie-Rose Alarie carried on the family tradition . The ever increasing popularity of the sugar shack requires the new owner to change its conventional method of maple water harvesting for faster and more effective techniques. Originally, the sap was collected manually from a seal to another by horse sleigh riding. Now that demand was greater and that labor was rare, Mr. Lampron had no other choice but to install a piping system that would gather and transport the apple sap directly to the boiler. 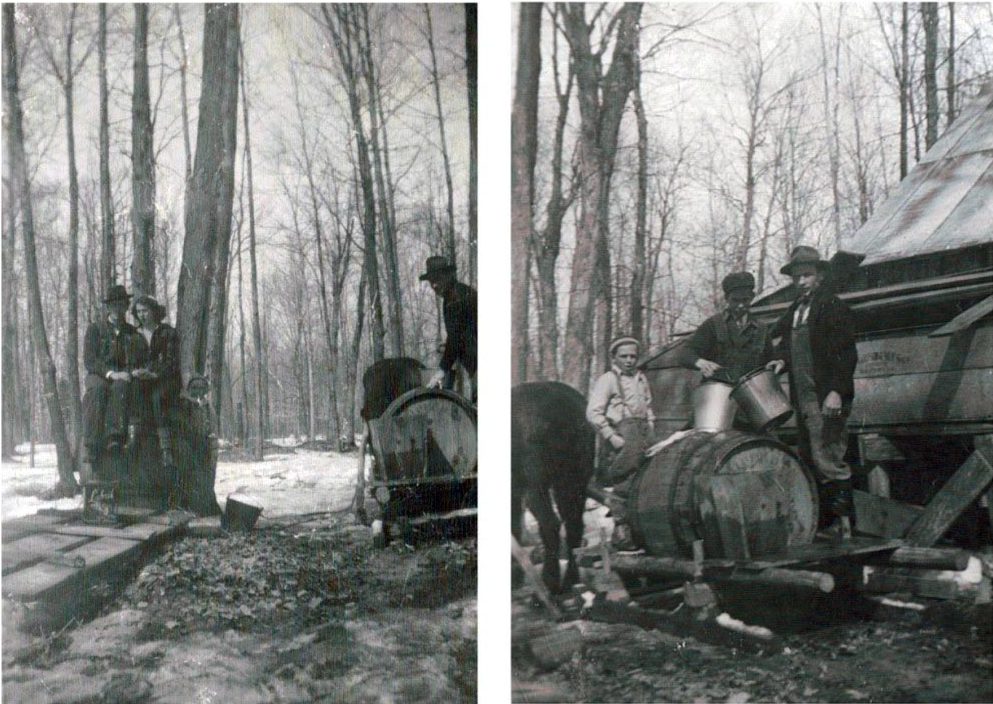 So one evening of February, he and some buddies on strike at GM, have laced up their rackets and proceeded with the installation of the system still used today! They now had a few 4000 notches which now provided maple sap to a too little sugar shack to meet demands of even more hungry customers! Within the few months that followed, it was the the sugar shack’s turn to undergo an expansion cure. Two new dining rooms were added to now offer more availability for both; enjoying traditional meals and for all other kinds of events all year round. In 1990, Mr. Lampron decided to transfer the family business to his eldest daughter, Jocelyne Lampron a women entrepreneur that will keep it for eight years with her husband Serge Racine before handing the keys to her younger sister, Chantal Lampron and husband, Daniel Laurin, in 1998. In August 1998, Chantal, Daniel, Jean-Guy and Marie-Rose, were invited by the Association Québec-France for a service trade. The family was going to introduce our culture to France! They left with maple syrup and served a traditional sugar shack meal in Perigord, the native land of foie gras! It was a great success and a memorable trip. Upon their return, Chantal and Daniel had big projects in head for their sugar shack … As they already owned a first sugar shack in the Lanaudière region, they found that most sugar shacks are mainly focused on entertaining adults; line dancing, singers and sleigh rides are fun in itself but for children, the trip of sap seals is the most interesting activity in a sugar shack … In 2000 she and her husband set out to create a village that families could visit when enjoying a sugar shack meal. We are witnessing, the birth of the first family entertaining sugar shack in Quebec! The first step was to build a real functional train that would circle the sugar bush. And then, several cabins were added around this unusual attraction. Visitors could now walk in a small traditional town while learning about the history and traditions of sugaring. They could visit the general store, the boiler, the pen and the farm, and of course, enjoy some taffy on snow. All these new attractions draw the curiosity of many new visitors.  Given the popularity of the concept, in 2001, the owners decided to add an important aspect to their decor … All self-respecting town has its church so they built a pretty little white chapel. The chapel would be a children playhouse during the winter months. In subsequent years, the sugar shack grew 3 new dining rooms and several attractions were added around this sugar village; such as rides, skill games, singers and traditional antique artisans.  To optimize the concept, the Chalet des Érables now specializes in entertainment for Schools, daycares and CPE. On weekdays, these groups of children can come and enjoy a full day of activities while learning about the history of the most entertaining sugar shack in Quebec! Since 2010, succession is preparing for a 6th generation. The children now parents of their own are ready to challenge the future of this great legacy. In 2011, the family home, adjacent to the sugar shack, was demolished to allow the construction of the ‘chalet’, a new building on the outskirts of the sugar village with traditional snacks and refreshments enjoyable to the sound of a singer. A rest area that allows parents to take a short break between two rides! THE CHALETS DES ÉRABLES, A SUGAR SHACK  … THE SUGAR SHACK!